I stumbled across the recipe for Guinness jelly while I was flitting around on the internet. For the past week, I’ve called it Guinness Jelly, Guinness Jam, Guinness Bread Stuff but all in all, it should just be called Awesomeness on bread. To shed a little light on what this substance might be classified as, I’ve taken the liberty to search out the definitions of certain bread spreads.

Jam: A sweet spread or preserve made from fruit and sugar boiled to a thick consistency

Jelly: A sweet, clear, semisolid, somewhat elastic spread or preserve made from fruit juice and sugar boiled to a thick consistency.

Preserves: Food made with fruit preserved in sugar, such as jam or marmalade.

Compotes:  Fruit preserved or cooked in syrup or a dish consisting of fruit salad or stewed fruit.

(I figure it didn’t really fall into any of those, so then I googled “gel” and “gelée”.)

Gelée: Any gelled suspension made for culinary purposes. 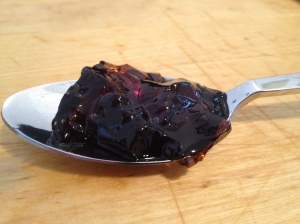 (Gelée is also the french word for Jelly, so there you have it, after all those definitions, we’re back to Guinness Jelly.) 😉

I wasn’t sure how it would taste, so I waited until I had the chance to try it before posting the recipe. Last night, the boy and I tried it out with the homemade white bread I baked during the day and some Philadelphia cream cheese. Holy crap, it’s amazing. The tang of the cream cheese coupled with the sweet, maltiness of the Guinness Jam was an awesome taste experience.

It’s actually really easy to make, since there’s only three ingredients and using the agar agar as the gelling agent also makes it a very forgiving jam. The first time I made it, it hadn’t set the next morning, so I dumped it all back into the pot, added more agar agar and boiled it out again. I did lose most of the “head” but at least I didn’t have to use another beer. *(Score one for me!)

Agar agar is a seaweed and comes in different forms, flakes, powder and strands. I used the powder form for this recipe. I found it at an Asian grocery store, and paid $1 for the package.

1 – Add the beer and sugar to a saucepan. (Make sure it’s a larger saucepan, as the carbonation will cause the liquid to expand when it boils.) Turn on med-high heat and stir to dissolve the sugar. Once sugar is dissolved, turn off the heat.

2 – Sprinkle the agar agar on to the liquid and let it absorb into the hot liquid. Give it 5 minutes or so.

3 – Turn on med-high heat and bring mixture to a boil and simmer for 5 minutes, this will activate the agar agar.

4 – Pour Guinness Jelly into jars and let cool, then place in fridge until set. (I let mine sit overnight.) 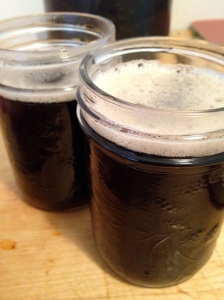 *As mentioned above, it goes awesome with cream cheese. I can also see it pairing very well with cheeses, such as Brie or Cheddar. I will be using it in place of a compote for the next cheese plate I set out.

What's on your mind? Cancel reply