Sorry, the above should’ve been: The Cavalcade of Vengeance Come’s in Canadian Sizes. *EYeTwItCh*

She Makes Me Smile (REDUX) is now available on Amazon.com for 0.99. This is the version I wanted everyone to enjoy. 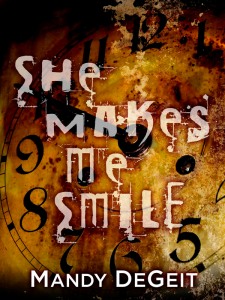 I want to once again thank Bob Ford at Whutta.com for the awesome cover and Kelli Owen for the editing. (Note I say editing, this time round those really are my words in SMMS.)

To reiterate what is happening with the sales of SMMS: 50% is going into a bank account/mattress/piggybank and from those monies I’ll be paying all the authors in Cavalcade of Terror* $25 and a contributor’s copy of the now defunct Cavalcade of Terror, for their stories. *(Even TonyG. He can get his own book though…)

I also encourage you all to please take the time to find out if these authors have anything else available to read and read it. They do not deserve what’s happened to them, I only wanted my story pulled not the entire book.

Here’s the list of authors you should check out:

*Cavalcade of Terror has been pulled from distribution again. It was taken down originally and SMMS was removed and replaced with a wonderfully titled story by TonyG. “Morgue of the Dead”. (Ummmm, as opposed to what… Morgue of the Living?) A day later, Wes Southard received an email from Tony stating he had no idea how Cavalcade got back up on Amazon as it was supposed to have been pulled because of an issue. He wouldn’t state what the issue was in the email, but if Wes wanted to talk on the phone, he’d tell him. Ha, Wes and I both know, I’m the Canadian issue.

Once the authors are paid, I will be contacting a contract lawyer based in Massachusetts to look over the contracts for Tony’s three presses. *(Even if just for an hour.) If something can be done, we shall forge ahead. I’m not looking for money or any form of compensation. My main concern is voiding contracts between Tony and the writers who feel their work was altered past the point of “editing”.

You can follow the progress here on my SMMS page. I even added a cool little thermometer thing. The first 900$ is to pay authors of SMMS because I broke their book. After I reach that goal, I’ll change it up to track the lawyer fees.

I want to take a moment to once again thanks everyone who had a part in this, and that includes everyone who shared, re-tweeted or told someone about what was going on. It wouldn’t have had the impact or the reach without all of your support.

I hope you enjoy the story, please let me know what you think, post a comment or tell a friend about it.
I’m not going to lie, I have been freaking out a little. I feel like expectations are so high with everyone watching me.

Well, I’ve always said I’m happy if just one person likes what I write. I think in this case, there’ll be more than that.