We had heard about it from one of the boys, a gastropub somewhere near Wolfville. Yesterday, in the middle of a snowstorm, we decided to take the rental car (which does not have snow tires…) and run some errands. I’m not sure what lead us to Port Williams, but I noticed a sign mentioning “gastropub” as we were heading down the  main road. After a quick u-turn, we followed the sign and made our way down the road to the building set on the Cornwallis riverbank. The Port Pub is in a great location that I think would be amazing in the summer.

(This photo of The Port is courtesy of TripAdvisor)

As we pulled into the parking lot, I was happy to see that it was in the same building as a micro brewery. Unfortunately, The Sea Level Brewing company was closed on Sundays, but the pub did have their beer available. We started our lunch with a tasting flight of beer. 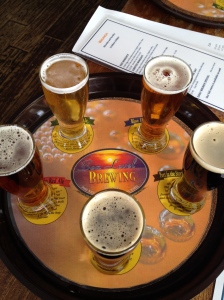 Usually when I have a flight, there’s one or two beers I find to be too hoppy for my likes. The flight consisted of five different types of beer, (from the far left going clockwise), The Rojo Mojo Red Ale, the Planter’s Pale Ale, the Blue Heron Extra Special Bitter, the Port In The Storm Porter and the High Street Wee Heavy Scotch Ale. My favourites were the Scotch Ale and the Bitter.

The menu had a lot of variety, which kept us deciding through most of our flight, but we finally decided on sharing a bunch of the appetizers.

We started with the lobster poutine. There were big chunks of lobster, cheese curds and a delicious lobster cream sauce served on crispy french fries. The sauce and cheese was evenly distributed throughout the poutine, which was very important as one of my biggest pet peeves when eating poutine is to end up with just fries at the bottom. I could’ve eaten the entire bowl to myself, but I was reserved enough to eat slowly and share half with the fiancé. 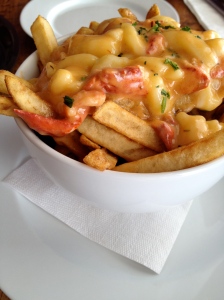 For our second “course”, we ordered the chowder. A thick, chunky soup loaded with different seafood and a creamy base was what came to the table. Once again, it was amazing. The seasonings in the creamy broth were bang on and complemented the big chunks of seafood really well. My favourite spoonfuls were the ones with the huge bites of scallop in them. 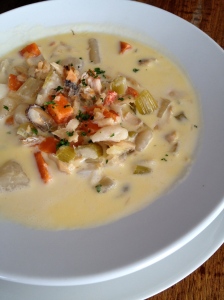 Finally, we ended the meal with crab cakes. The accompanying lemon dill sauce was excellent as were the crab cakes. My only complaint was that there was only two of them. (I could’ve done without the salad, which was good, but still just a salad.) It was an appetizer portion, therefore the two crab cakes make sense. 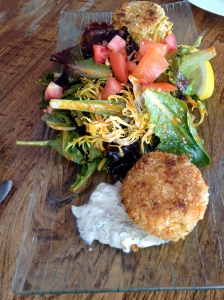 We are already planning to make a second trip to the pub this week, as there was a lobster club I wanted to try, but I just couldn’t make room.

Overall, I would highly recommend this gastropub to anyone in the Wolfville/Port Williams area.

What's on your mind? Cancel reply